Getting the words down right is the big challenge for every writer, whether you’re independently publishing or traditionally published. At some point every writer has to switch from writer to editor and make certain that the words they’ve written are correct. This search for correctness goes beyond the simple nuances of grammar to the choices of specific words, the flow of sentence phrasing, and more.

Two things to keep in mind: first of all, be aware of the difference between detail work and a broader perspective. Every writer can self-edit to some degree in a broad sense. But not every writer is able to perform the meticulous level of edits needed to prepare a work for publication, which leads to the second thing to remember: the more eyes on a final manuscript, the better. In this post I’m focusing on the broader level of editing.

First of all, let’s look at grammar in the context of self-editing. I’m not talking about the fiddly bits of word choice and whether you should use lie or lay. Those differences can be easily sussed out using Word’s grammar editor (note: use with caution as Word is not always correct) or a dedicated grammar editor. Rather, I’m talking about sentences that don’t flow for specific grammatical reasons. The big stuff. Clauses and subordinate clauses. The use of minimizing or what I call “weasel words” which soften the impact of your writing.

“Weasel words” tend to modify strong verbs. Did you see what I did in that sentence? Take out the “tend to” and see how the sentence meaning shifts slightly. I am as much of an offender in the “weasel word” category as anyone else. I qualify what should be a strong statement by chucking a few weasel words into the mix. I do it when I’m uncertain about the statement I’m making, either consciously or unconsciously. Weasel words can be used to some effect as a characterization device. But use them carefully and with intent.

The ability to self-edit effectively varies between writers. Some writers can do an excellent job; others simply can’t. Often we don’t see the flaws in our language choices in early drafts, or we can spot the errors of language but not the gaping hole in our plot reasoning, or the unintended irregular behavior of our characters. This is where a set of good beta readers becomes effective, as a useful tool for revision.

When I speak of “beta readers,” I refer to outside readers who review a draft form of your work that you plan to revise. Some writers prefer to call them first readers or alpha readers, but “beta” is the most common phrasing. Unlike a critique group, betas read and report individually, rather than as part of a group. Reciprocal reading may or may not be involved. The beta does not provide line edits, copy edits, or any sort of detailed work that will be appropriate later on in book production. Rather, the beta reader’s job is to provide feedback about early revisions as to whether the language flows, the plot makes sense, and the characters are believable. A good beta flags those places in the early draft where a reader trips over something.

Where do you find beta readers? Just about anywhere. Some writers depend on spouses or close friends. Others organize beta teams from their fans. Betas can be readers or writers. What you are looking for is that other eye that finds the problems that you as the writer are too close to the story to see. But the beta also needs to be someone tolerant of the roughness of early book drafts, because most of us do not turn out pretty early drafts.

One thing to be concerned about, though, is a beta that starts rewriting your words. A good beta recommends a revision but leaves the actual work of the revision to the writer. Good betas also don’t get bogged down in line editing or copy editing details. That’s what you pay a good editor to do for you. The beta reader is assessing the story from a reader’s perspective.

Most beta edits are done either through friendship or the desire to read an early draft from a favorite author. More substantive detail edits should be paid, either in cold hard cash or bartering of services. Beta editing is not and should not be a substitute for final prepublication edits. It is a tool to aid the author during the revision process.

Learning to edit yourself is a crucial task for any writer, no matter where you are in the writing process, and it goes far beyond grammar to the way that your words flow in the final draft. Following these simple suggestions will help improve your writing skill. Good luck!

Other posts in this series by Joyce Reynolds-Ward (note: each website owner will post at some point during the week listed).

April 19-25—My Approach to the writing process https://varidapr.com

April 26-May 2—Reading to Impact your writing http://www.conniejjasperson.com

May 3-9—Advice for new writers https://lecatts.wordpress.com

Joyce Reynolds-Ward is a speculative fiction writer from Enterprise, Oregon. Her short stories include appearances in Well…It’s Your Cow, Children of a Different Sky, Allegory, River, and Fantasy Scroll Magazine. Her agripunk thriller trilogy, The Ruby Project: Origins, The Ruby Project: Ascendant, The Ruby Project: Realization, are due for release in November, 2020. Her books include Shadow Harvest, Choices of Honor, Judgment of Honor, and Klone’s Stronghold. Joyce has edited two anthologies, Pulling Up Stakes (2018), and Whimsical Beasts (2019). Besides writing, Joyce enjoys reading, quilting, horses, and hiking, and is a member of Soroptimist International of Wallowa County. 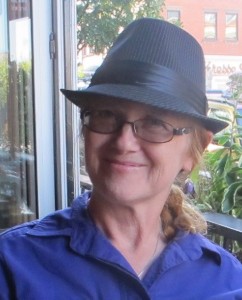